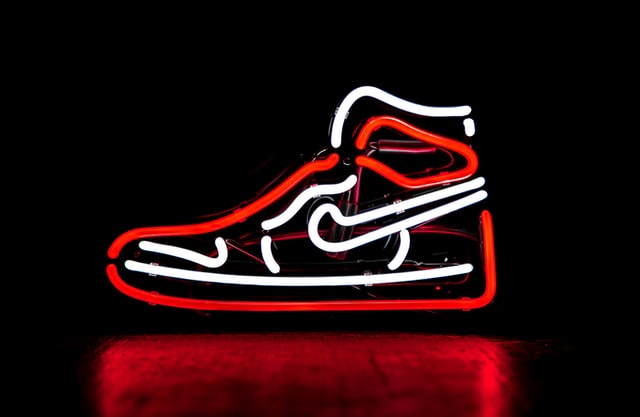 Nike doesn’t sell shoes. It sells an idea with its marketing strategy!!

The brand I am going to talk about today needs no introduction. It’s none other than the mighty Nike. But there is a Marketing and advertisement strategy of Nike that you may need to know.

See the poster below? This is one of the first print ads of a then-upstart shoe manufacturer “Nike” released around 1977.

Before moving ahead let’s also look at one of the first TV advertisement Nike did in 1988. The ad features 80-year-old Walt Stack jogging slowly across the iconic Golden Gate Bridge. He is seen chatting about his daily 17-mile run. He also jokes about the fact that to stop his teeth from chattering in the winter, he just leaves them in the locker!

But why am I showing you these old advertisements from the time of your grandpa? Noticed something striking and similar in both these ads?

On the print advertisement, out of a copy that is 152 words long, the word Nike is the 109th word, and appears only twice in the copy (once at the 109th position and once as the logo). The advertisement’s emotional focus then was not on Nike itself but on the euphoria of running.

In the TV advertisement, the word Nike appears only once at the end as the brand logo, and Walt Stack does not talk about the shoe or the company at all. He instead chats about his love for running and what he’s achieving every day. Interesting!! Right?

No harm in learning a brief history of this superstar brand Nike before we delve further into the marketing strategy!

Nike was founded by Phil Knight and his running coach Bill Bowerman as an importer of running shoes. Shoes were manufactured by Onitsuka Tiger (now Asics) and imported from Japan to the USA. Bill Bowerman, not coincidentally, is the person responsible for installing jogging/running as a popular form of exercise and activity among the general public.

While one of Bill’s objectives was obviously to sell the company’s shoes, his main goal was to introduce people to running and have his products help them achieve their best. And it truly reflects in the marketing strategy of Nike even today. The goal has become a strategy now. (That’s why we are writing about it!)

What Nike has been doing almost since its inception, and doing extremely well, is Benefits-based Marketing. What is this type of marketing strategy?

Every product emerges from the necessity of fulfilling a need. A feature is a characteristic of the product. The feature can be the appearance of the product, a component, or some capability. A benefit of a product is the outcome that users get by using one or multiple features of that product. In Nike’s case, it’s always been to make the consumer better at athletics (a capability).

People don’t buy what you do, they buy why you do it

So here’s the thing – Nike does NOT sell shoes. As part of its strategy, Nike sells the consumer an idea of overcoming odds, mainly athletic.

The goal is to run to stay healthy. To run one needs comfortable shoes. Nike, by selling the idea of running, is selling its shoes indirectly. (Isn’t it amazing?). Time and again Nike ads have showcased a protagonist battling against a challenge and coming out on top, incidentally, using Nike products, such as the Find Your Greatness campaign.

This approach is excellent because the viewer (potential customer) identifies himself/herself in that protagonist. Every time there is a choice to go to the gym or rest on the couch, the battle begins. Every time our body feels tired and cannot go another mile, it is that same battle. And every time we use a Nike product while getting past that hurdle and winning the battle, an association between the brand and overcoming challenges is built in our minds.

In another marketing campaign, Nike asked 6 NFL players to work with the football teams at each of their respective high schools. The resulting videos showcase these NFL players coaching the high school players about pushing harder and getting to the next level. There is a bare minimum mention of the brand.

By sponsoring such events, Nike creates a campaign that not only promotes the act of giving back to sports and to the community but also keeps the theme of overcoming challenges intact. And each time these videos are shared or liked by people, the Nike brand automatically enhances its mindshare. (Check out How Titan watches Enhanced its mindshare through a perfect advertising strategy)

This motif of overcoming challenges is so universal that it can be rehashed and reused to work with any hurdle. Case in point, the recent You Can’t Stop Us advertisement by Nike, which apart from being an incredible editing masterpiece, is another ode to humanity’s struggle and capability of sustaining hope, conquering obstacles, and making the world a better place, together. Fun fact: the creative team went through over 4000 action sequences to make the final cut of 72 shots!

Let’s also look at some of Nike’s overwhelming statistics…

Benefits-based marketing strategy has worked exceptionally well for Nike so far. It’s as if the brand has understood the pulse of a potential customer. Nike has built one of the most powerful brands in the world by tapping into the collective aspirations of people wanting to become better versions of themselves.

So it is not surprising to know that Nike has a record of selling about 25 shoes every passing second. That’s insane. Nike’s overall revenue for the Fiscal year of 2018 pulled in $36.4 Billion. Data show that Nike is selling over 780 million pairs of shoes each year through its 1182 stores and digital (30% of Nike sales is through digital channels)

Right from its extremely recognizable slogan and logo, to its various interpretations of heroism in overcoming various hurdles, Nike has created a marketing juggernaut through benefits-based marketing and advertising. Selling a lifestyle rather than shoes has enabled the brand to become aspirational, generate word of mouth, and absolutely kill on social media, turning it into the behemoth we all know today.