The first time I visited a ‘Tesco Extra’ store was at midnight, making an emergency run for next morning’s breakfast. The store seemed to occupy the area of an entire football field in Ashby-De-La-Zouch, UK. Even at an ungodly hour, Tesco was well-lit with visiting customers.

Inside, there were never-ending aisles lined up with groceries, food items, clothing, electronics, and whatnot. It was easy to lose way and lose track of time in the colossal supermarket.

I thought to myself that this would be the only store of its kind in the county, but I was wrong.

Tesco has 4008 stores across the UK and Republic of Ireland, with 7005+ stores and franchises across the world. In Europe, Tesco has established itself in Hungary, Slovakia, Czech Republic, Poland and Turkey. In Asia it has stores in Thailand, South Korea, Malaysia, Japan and China.

TESCO is much more than a chain of supermarkets selling a million products. It’s a giant conglomerate, spanning across so many verticals. It’s the equivalent of one of the FAANG companies but in the Grocery & Retail sector. It becomes imperative for business enthusiasts like you and me to understand the business model of this retail giant called Tesco.

It’s considered a part of the ‘Big Four’ supermarkets alongside ASDA, Sainsbury’s, and Morrison’s in Europe. 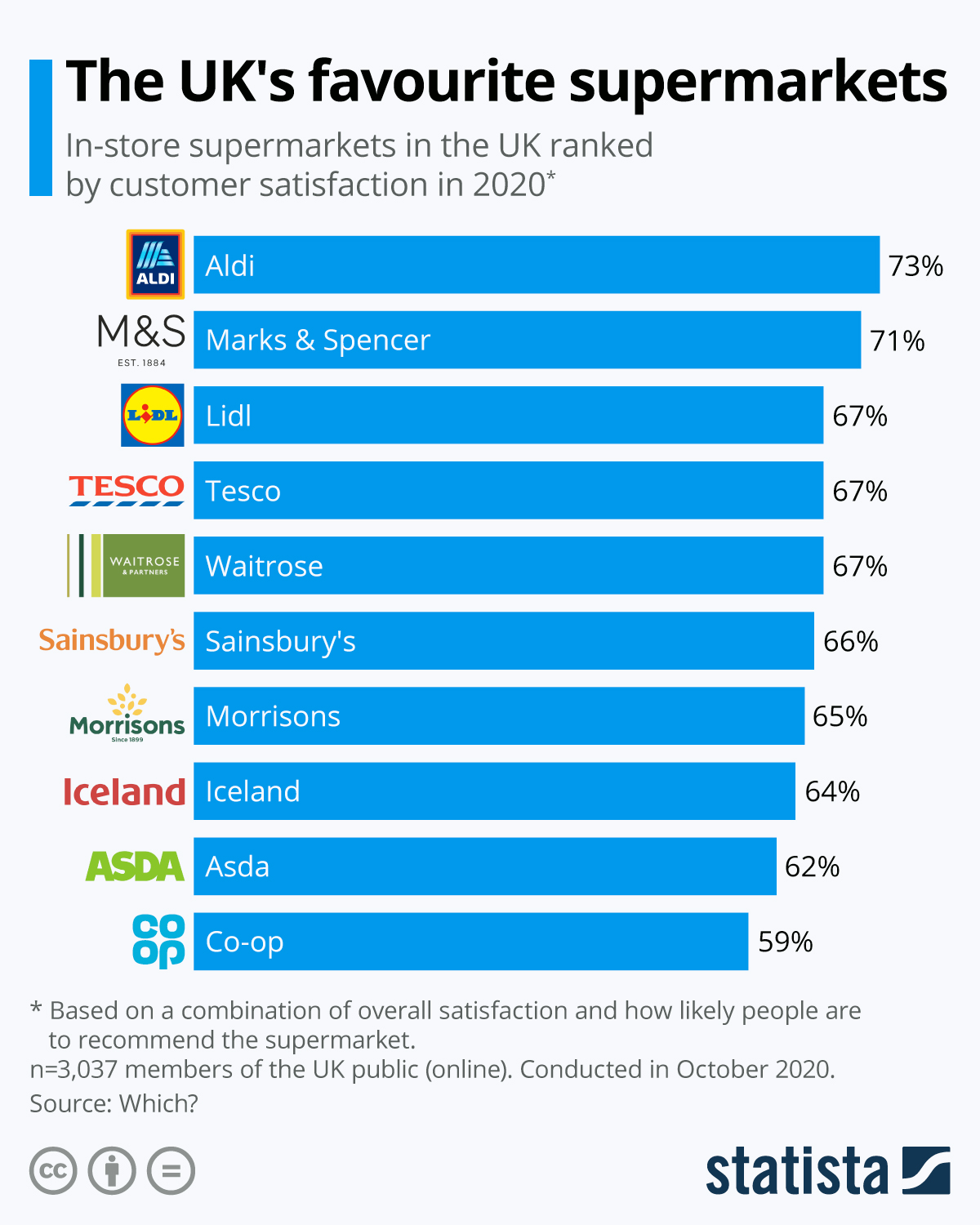 The Birth of Supermarkets in Britain

Founded in 1919 by a war veteran – Jack Cohen, Tesco began as a grocery stall in the East End of London, making a profit of £1 on sales of £4 on day one. Tesco’s first store was launched in 1929, selling dry goods & its own brand of Tesco Tea. A hundred more Tesco stores were opened in the next 10 years.

With 100+ mom-and-pop stores in Britain, Jack wanted to expand his product range. He traveled to the US in 1946 and noticed the self-service system, where customers would select different products on the shop floor and finally checkout at a counter. Jack brought this concept back to Britain, giving birth to Tesco Supermarkets and changing the face of British Shopping. His motto was to “stack ‘em high, and sell ‘em low (cheap).”

Tesco has a wide range of supermarkets depending upon their size, range of products, and location. This also helps regulate their Supply Chain to reduce wastage.

Tesco Business Model is based on various verticals

Tesco has deep-rooted its businesses in the European market so well, it’s difficult to miss out on the Tesco hoarding anywhere. Its Businesses and subsidiaries are:

A glimpse into the Complex Supply Chain

A supply chain is one of the critical aspects of the business model of a giant retailer like Tesco. Tesco has its priorities set when it comes to procuring products from different parts of the world:

It procures goods from over 44 countries, majorly China. A stock of up to 90,000 different products (30% are food & beverages) is transferred via the global sourcing office located in Hong Kong. Keeping wholesalers out of the loop, Tesco procures directly from suppliers. The conglomerate has developed and maintained long-lasting relations with suppliers’ world over—the main ones being General Mills, Kellogg, Mars, and Princes.

Tesco has set up a separate division to regulate its supply chain, “the machine behind the machine” – Tesco International Sourcing (TIS). It can be compared to the East India Company of the 18th -19th Century, catering to only one customer – Tesco.

TIS is connected to over 1000+ suppliers across 1200+ factories. It’s responsible for over 50,000 Tesco product lines in terms of quality control, sourcing, production, designing, timely delivery, and sorting trading/customs documentation.

Tesco coordinates with TIS on a daily basis to procure products in the following ways:

Despite shutting down most its mall operations, Tesco survived 2020 through its online retail store Tesco.com, with double the orders. Its E-commerce net sales had shot up by 31% from 2019-2021.

A Global Operations & Technology Center in Bengaluru was also set up in 2004. This center serves as the backbone of distribution operations for Tesco worldwide. Its business functions are- Finance, Property, Distribution Operations, Customers & Product. The employees at this Center are Engineers, Analysts, Designers, and Architects.

Tesco has always believed in acquiring loyal customers and regaining stakeholders’ trust. It aims to reach customers from all financial backgrounds. So it launched 2 of its own sub-brands – Tesco finest for the affluent customers and Tesco Everyday Value for the rest of the crowd.

Tesco also launched the Club Card in 1995 as a Membership card, to maintain customer loyalty and keep them coming back. The Card operates on a point-based system with discounts on products, & other subsidiaries like double data on Tesco Mobile. With 5 Million subscribers in the first year, Tesco finally overtook its competitor – Sainsbury’s to become No.1 in the UK.

The Club-card strategy was used to obtain customer data and observe buying habits. This data was analyzed, allowing Tesco to put the right products on shelves while eliminating unpopular ones. Tesco realized that the Club Card isn’t just a quick fix & temporary promotional tool; it’s a promotion in itself. This made the Tesco Club Card unique and long-lasting.

Tesco also realized that spending Billions on traditional marketing efforts and maintaining a ‘one-size-fits-all’ brand image wouldn’t work. It decided to hyper-target specific customers and to earn their trust. For starters, thousands of head-office staff and senior executives were sent to work in stores – to demonstrate how Tesco values its customer. Customization became key for its new marketing strategy; sending out discounts on birthdays via Emails and campaigning from door-to-door.

Tesco also made a partial shift to Digital Marketing which costs much lesser and has a wider outreach. It created well-tailored profiles on all social media platforms. On Twitter, it has more than 15 accounts, separate for each of its business units. The online customer care account on Twitter is active 24-7.

All supermarkets commonly advertised themselves to have quality products at a reasonable cost; Tesco wanted to differentiate itself as a unique brand. It introduced step-by-step Recipes prepared from ingredients available at any Tesco store, with Chef Jamie Oliver as its Health Ambassador. Tesco Food and its variety of recipes were a massive hit. Later on, the monthly Tesco Magazine as a food & lifestyle magazine was also launched, with 4.65Million readers worldwide.

The beginning of the pandemic in March 2020 left people apprehensive about visiting a physical store to buy groceries. To deal with customers’ concerns, Tesco came up with an instructional advertisement in April ‘20. With crisp instructions similar to that of an in-flight safety video, this ad showed customers how to physically shop and behave at Tesco stores. It was considered to be the most effective advertising and communications campaign of 2020 as per YouGov BrandIndex.

Tesco’s earliest competitor has been Sainsbury’s since the 70s. The Tesco Club Card strategy in 1995 helped it overtake Sainsbury’s to become the No.1 Retailer in the UK, but not for long. The ‘Big Four’ supermarkets in Europe have been in close competition throughout the years. Tesco has acquired a 28% majority stake in the UK market.

The horse meat and accounting scandals were a real setback for Tesco, letting competitors take over the European market. The newest German entrants – Aldi and Lidl had caught customers’ attention and market share in a short span of time.

With a combined market share of 12%, these German retailers posed a threat to Tesco. So much so that Tesco began the ‘Aldi Price Match’ campaign to curb the growth of the German discounter and win back customers. Tesco started price-matching thousands of its products with that of Aldi, offering better quality and branded products at Aldi’s prices.

Tesco has a majority market share in Britain, with Sainsbury’s and ASDA in tow:

It’s a well-known fact that giant conglomerate retailers are one of the major causes of rapid climate change and increasing carbon footprints. Tesco realized its impact on the planet and launched the Little Helps Plan as a core part of business in 2017. This plan serves as a framework to attain long-term sustainability. Its four Pillars – People, Products, Planet, and Places are aligned with the UN’s Sustainable Development Goals.

Until now, the Plan has enabled Tesco to:

Apart from partnering with various other organizations, Tesco entered a 4-year partnership with World Wide Fund for Nature (WWF) to address one of the biggest causes of wildlife loss – the global food system. It aims to eliminate deforestation from products, promote recyclable/compostable packaging and minimize food waste.

Tesco is one of the few successful retailers in the world, with a compelling history. Tesco has overcome numerous issues across its supply chain, faced global criticism, and still stands undeterred in the European market with its rock-solid business model. It has always adapted to its unpredictable consumers and continues to do so while caring for the planet.

CEO Dave Lewis, who took over Tesco in 2014 (during the struggle years) & stepped down in September 2020