Do you agree that the pictorial representation for the search “travel” or “dining room” is more valuable and inspiring than on a text-based search engine?

Pinterest is a lifestyle search tool for millions of people. People go to Pinterest with excited eyes to look for amazing recipes to cook for dinner on weekends, find beautiful designs for their homes, or find creative educational materials to teach their children.

Pinterest has now become one of the biggest global platforms in terms of active users. And the social media giant scores even higher in terms of user engagement. What makes Pinterest particularly interesting is the fact that it has, indeed, a unique value proposition. I know that you know the value proposition of Pinterest much better than me but what I am going to share is more strategic in nature- the business model of Pinterest, a platform best known as an inspiring visual discovery platform.

Our mission is to bring everyone the inspiration to create a life they love. We believe that when people find great products from trusted merchants, it can empower them to do things they care about. – Mission Statement of Pinterest

Pinterest is the visual discovery engine. It is where you find and do what you love. With Pinterest, you can discover valuable and relevant things that inspire you to do stuff.

In 2010 three entrepreneurs: Ben Silbermann, Paul Sciarra, and Evan Sharp launched Pinterest. The idea was to establish something that can benefit society at large. That can inspire the community. Soon Pinterest became the darling application of technology media with its splendid growth.

It began as a tool to help people collect the things they were passionate about online. But it soon became apparent that the absolute joy was getting inspired by what other people shared and applying that inspiration to their own lives.

Pinners began using the platform to answer simple questions like “What should I cook?” and “What should I wear?” They also used it for epic goals like getting a tattoo or building motorcycles. Whatever the interest, people have told us that life gets a little better when using these ideas to make more of their moments.

What is the key difference between Pinterest and Google?

When you have a very clear idea of what information you want, its undoubtedly Google. Users on Pinterest don’t actually know what they’re searching for when they arrive, and they’re open to ideas.

Pinterest as a platform is not just about the images that a user shares; it’s the ideas that are embodied in those images. These images inspire the users to collect them on their board and share those inspiring images with their followers and friends. Unlike other social media applications, users not only come back to get entertained, but they also come back to get inspired.

These differences on the surface have deep-reaching impacts on all elements of Pinterest’s business model.

Browsing and saving visual ideas on Pinterest helps Pinners imagine what their future could look like, which allows them to go from inspiration to action. 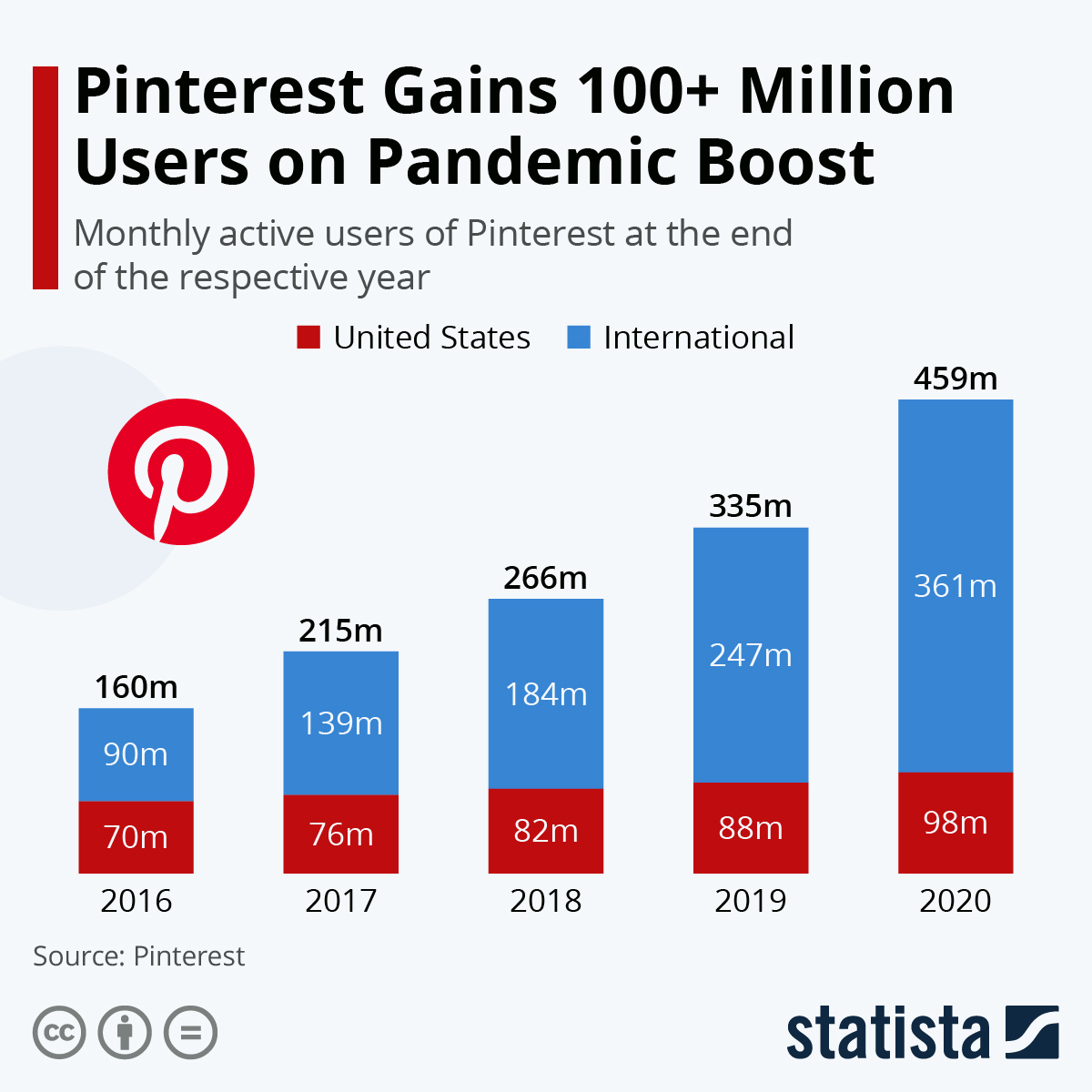 As we look to the future, our focus will continue to be delivering more inspiring and shoppable content and helping advertisers realize the value and positivity of our platform.

Pinterest has created a totally new and differentiated market among the cluttered social networking industry with its unique virtual pinboards that captures a user’s hobbies and interests. Pinterest launched “shoppable” pins to differentiate its platform and allowed retailers to upload their entire catalogs.

Considering the path Pinterest has taken, it seems that the future of commerce might not be Amazon and the likes. But it may be Pinterest. Influencers or users in general on Pinterest can convince their followers and friends to prefer the products they are using. That makes Pinterest an ideal platform for products like apparel, luxury goods, or travel. This concept of social commerce is rising and the Pinterest business model with millions of active users makes it a potential leader in the social shopping space. Its long-standing partnership with Shopify allows smaller merchants to sell their products on Pinterest.

Pinterest’s most significant opportunity is in improving the product itself, both for users and advertisers. It’s working on several promising innovations. Pinterest is already a video platform. Video is absolutely exploding on Pinterest, as Pinners now watch just shy of one billion videos a day. Recently launched Pinterest Premiere gives users the option to align video ad targeting with either a specific demographic or a specific category

With the rising rivalry between Instagram and Pinterest through the launch of new features now and then, Pinterest has to strengthen and expand its scope. Pinterest cannot be seen as a photo application for extravagant travel or apparel images. Pinterest understands this and is planning to diversify its ads into various other segments.

With a unique niche in social media and search and a promising future in the “social commerce business model”, Pinterest has the potential to surprise even the bulls five years from now.

A Chartered Accountant by profession and enthusiastic learner believing in simplicity in all avenues. A creative problem solver and an analyst focusing more on a real problem rather than just finding hypothetical solutions. Inclined giving zest to influence more people in their chosen niche.