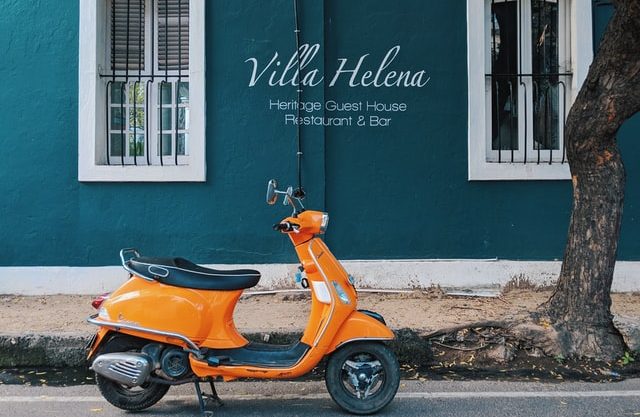 Everything Retro is making a comeback, be it Nintendo with its Switch (the original hit was the Gameboy of course) or the Mad Libs with its interactive app for the timeless retro game. Old is the new cool.

But you can probably notice a pattern here that even if old things do come back, they do not `or rather cannot come back the same. They need to change as per the tastes of the new generation who they are trying to entice. They need to evolve; they need to innovate.

So, I thought it would be appropriate to talk about a brand which gave rise to an entire line of automobile and a retro-pop culture around it. I’m talking about Vespa. Many Indian readers can remember the scooter that had Vespa written on one side of the fender and LML on the other. The origins of the brand are very old and make for a cool tale. Who is up for a very cool story of a very cool brand called Vespa?

Every great story involves time travel (The classic Once upon a time). So does the story of Vespa. This story starts in the 1940s. The world war had just ended and Piaggio (maker of Vespa) had had its Pontedera (Italy) factory (where they used to make bomber planes) bombed during the conflict.

Italy had it’s aircraft industry restricted to a great extent as part of the ceasefire agreement with the allies. Enrico Piaggio, son of the founder of the company Rinaldo Piaggio, decided to leave the aeronautical field behind and address the people’s need for an economic mode of transport.

The idea was to make a scooter utilitarian and appealing enough to the masses. Till that time, scooters were mainly used by the military for quick on-ground transportation (you might have seen this in some Call of Duty games).

So, two Piaggio engineers, Renzo Spolti and Vittorio Casini, took to their whiteboard and designed the first-ever Vespa, or maybe not quite. Mr. Piaggio was disappointed with the initial scooter. The scooter was named Paperino, and looking at the photo, you can understand Mr. Piaggios disappointment.

He then contracted an aeronautical engineer Corradino DAscanio to tinker with the designs. DAscanio was earlier contacted for the same thing by Ferdinando Innocenti, the founder of Lambretta scooters, Vespas biggest rival, and another iconic scooter brand.

DAscanio was not happy with Innocenti’s interference in his work and that is why he happily moved to Piaggio’s side. He retained some of Paperinos features while changing a lot of others. And finally, the MP6 prototype scooter (commercially called Vespa 98) was born which gave Mr. Piaggio his “Sembra una Vespa!” (It looks like a Wasp!) moment. And that is how the scooter and its name were born in 1946.

Flight of the Wasp: Rise as a cultural icon

Vespa started making scooters as a utilitarian vehicle for the larger public. And they were successful in their endeavor. In 1947 itself, they sold about 2500 units. 70 years from its first flight, the wasp has sold over 18 million units. But on the way, Vespa became an icon of the footing not many brands are able to match.

The brand started to popularize itself as a style icon after Audrey Hepburn side saddled Gregory Pecks Vespa in the movie Roman Holiday. This resulted in catapulting the sales to over 1,00,000 in that year.

Vespa clubs started popping up all around Europe and by 1952, worldwide Vespa club membership had surpassed 50,000. There were multiple pageant runs organized across the world. In fact, there are Vespa world days held every year in Saint Tropez (2-5 June in 2016) which brings together all the clubs from the world and features pageant events.

Another example is a Vespa model personally signed by Salvador Dali in 1962 when two art students were taking a trip. The piece is kept Piaggio Museum and Gift shop in Pontedera, adjacent to the plant.

Here are some other pieces apart from Dali which are just as amazing.

Vespa entered India in 1960s through a licensing arrangement with Bajaj Auto. In 1970s, the deal came to an end in 1971 due to nonrenewal of license and Bajaj started making their own scooter Chetak. Vespa returned in 1983 through a joint venture with LML which again came to an end in 1999 after a protracted dispute.

Vespa kept changing the performance and variants of the scooters as well with time. However, with the rise of motorcycles and the availability of economic four-wheelers, people started shifting away from geared scooters.

But then about in the 1990s, Honda came up with the design of continuously variable transmission in Activa. Loosely translated, it means a scooter without gear. It became an instant hit and practically revived the scooter market overnight. Vespa introduced their product in this line in 1996, on its 50th anniversary.

A new twist to Vespa’s story came when Vespa came back to India in 2012 and this time, without any partnership. The variants currently available in India range from 90,000 to 1,40,000. Another interesting parcel of services that Vespa has introduced feeds directly into the vintage value of the brand. You can get a Certificate of Origin to increase the credibility of your scooter or a Technical data sheet containing all the technical specifications of your vehicle.

On the latest, a South Indian product design firm Mightyseed Designs has made an electric scooter, reimagining the original Vespa 98. Whether Vespa had anything to do with it or not remains a question. The design looks like a cool mix between vintage originality and futuristic sleekness, right?

Conclusion: Vespa is a true story of innovation

The story of Vespa so far clearly states the ability of the brand to churn out innovative pieces. What started as a stop-gap to revive the company turned out to be a way to rise from the ashes of the world war. Over the years, Vespa has introduced many utilitarian models to keep pace with the changing times. But there have been enough of the ones to keep the gossip going.

Now we live in a world of increasing traffic and pollution. It is a time when the need for a comfortable ride trumps the want to look cool. Consequently, it is a time where people would prefer gearless scooters over bikes (I know I would, to rid myself of the hassle of changing gears in the non-moving traffic), which makes it a time when the Wasp might fly again. What do you say?

I'm a Chartered Accountant by profession and have been working with Swiggy for the past couple of years. I like reading & writing about business, finance, psychology and behavioral finance. Other than this, I cook, swim and listen to music in my free time