It stimulates curiosity on Reddit’s business and revenue model and how it is “unique yet ubiquitous” to make headlines everywhere, be it Wallstreet, Christmas, or politics!

Reddit is a leading social media site offering news aggregation, content rating, and general discussion platforms. It was founded in 2005 by Steve Huffman and Alexis Ohanian, with Aaron Swartz in the University of Virginia. Reddit is valued at $10 billion in August 2021. As of September 2021, Reddit ranks as the 19th-most-visited website in the world and 7th most-visited website in the U.S., according to Alexa Internet.

The platform allows registered users, called Redditors, to post content. Each post is open to the entire Reddit community to vote upon, either by down- or upvotes. The most popular posts are featured directly on the front page. Subreddits are available by category and Redditors can follow selected subreddits relevant to their interest and also control what content they see on their custom front page. Some of the most popular subreddits are r/AskReddit or r/AMA – the “Ask Me Anything” format.

The platform has a distinctive feature called Subreddits which has made it the front page of the internet! Subreddits are user-created niche conversation forums running in million users used to discuss a topic. There are over 2.2 million subreddits; 130,000 are considered active communities based on receiving five comments daily. Redditors become title moderators of subreddits via forming a subreddit or by getting promoted by a current moderator. 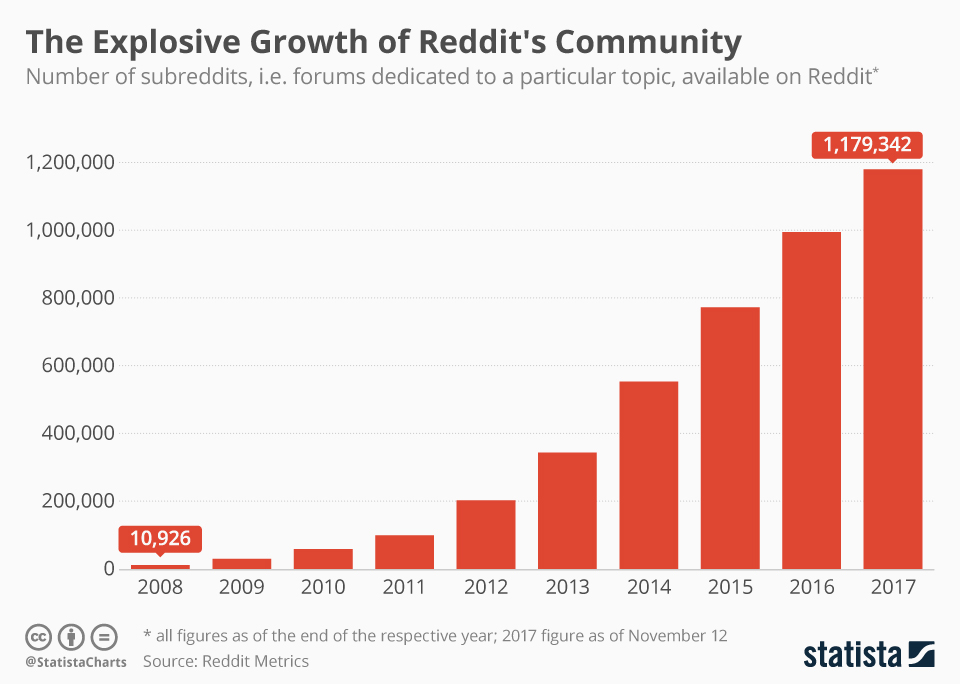 In 2020, Reddit earned revenue of $170 million. Why are Reddit’s revenue figures and business model intriguing? How does Reddit even make money? What is Reddit’s business model? It is a typical business model of social media apps of making money via advertising. How has Reddit differentiated itself?

Reddit is competing with players like Twitter, Facebook, and Instagram, which have massive global audiences despite being niche in its 52 million daily user base and demographics that primarily comprises male, young, and digital in their news preferences. It thus becomes worthwhile to know what makes Reddit compete, thrive in the social media jungle, and even make money.

Reddit Ads – In the second quarter of 2021, Reddit reported having generated 100 million U.S. dollars in ad revenue for the first time in history. Additionally, the company added this represented a 192 percent increase compared to the same period a year earlier, which placed the ad revenue generated in the second quarter of 2020 at an estimated 34.25 million U.S. dollars.

Reddit Premium Subscription – It is an ad-free experience with 700 free monthly coins and other perks. It costs $49.99 annually.

Reddit Coins are virtual goods in bundles that can be gifted to other Reddit users for posts or comments for their contributions and good content. This also includes access to the r/lounge. It is an exclusive subreddit group of Premium members only.

These are the primary and factual sources of revenue for Reddit. Now you very well know how does Reddit make money. We can now deep dive into what elements of Reddit make it the front page of the internet!

As of the second quarter of 2021, the Reddit mobile app was counting more than 37.6 million monthly active users (MAU) worldwide on iOS. In comparison, Reddit users active on the platform daily via Android mobile app were only 13.42 million. In the first half of 2020, the number of monthly Reddit app users on iOS increased by more than 34 percent, going from roughly 16 million users in the first quarter of 2020 to 21.6 million the following quarter.

We are living in a virtual world in which gaining popularity and staying anonymous are equally valued!

Reddit has achieved popularity as one of the top 10 social media sites in the U.S. by recognizing this phenomenon. In the extremely competitive landscape in which it operates, Reddit has provided the comfort of anonymity. Redditors have pseudonymous usernames. The only requirement for creating a Reddit account is an email address.

It has enabled anonymous browsing that does not save your search history to your Reddit account. It can be debated that anonymity generates a lack of censorship. Nevertheless, Reddit is striving towards building a strong content moderation policy against harassment, hate, and violence.

It is interesting to note that the advertising surge in Reddit is operating amongst anonymous users. Why digital marketers consider Reddit a hot space for their advertising is answered in the next segment.

The power of community building

Reddit’s business model is not all about making money like other social media giants but it involves building meaningful communities that add value to its user. Subreddits are communities around a particular topic or idea. In essence, a subreddit isn’t just about a topic or idea. It is about a hobby, an emotion or crucial aspects of life!

r/teenagers is where I feel like I can truly express myself. I love engaging with people my age who are going through similar problems as I am. It’s helped me feel more self-confident.

As mentioned earlier, there are over 2.2 million subreddits, 130,000 of which are active communities. Reddit promotes posts and comments by their scores. The number of upvotes and downvotes determines scores. The more users upvote a post, the more visibility it gets. A high number of downvotes for low-quality posts renders it almost invisible. Subreddits are thus strong communities of discussion and participation. There is less spam and more expression in these vast spaces.

As Reddit has passionate communities, it has passionate consumers. In the report, Reddit’s Role in the Path to Purchase, online purchase journeys including multiple devices and social media competitors were analyzed. The subtle insights of the report lie in 3 key takeaways:

While subreddits are building niche and dynamic communities, Reddit has commercially built a fanbase over the years that is cherished. One great example is RedditGifts. It is a website through a verified Reddit account that matches one person with another person across the globe.

Reddit’s Secret Santa game is a unique Christmas tradition for the internet and the largest online Secret Santa game. Each participant fills out an online profile about themselves for their respective Santa. They are sent the name and address of the random person they need to send a £20 gift. People have enjoyed Reddit’s Secret Santa since its inception in 2009 over the years. The lucky ones have received gifts from Bill Gates, who regularly takes part in the Reddit Secret Santa craze.

As Reddit has told The Independent, “Over 100k+ people have signed up to participate in the last five exchanges, including this year – it’s been great to see our other exchanges be a powerful tool for connection in such a physically isolated time.”

Reddit recently has announced that it is shutting down its Secret Santa – “We made the difficult decision to shut down Reddit Gifts and put more focus on enhancing the user experience on Reddit – this includes investing in the foundation of our platform and moderator tools, making it more accessible for people around the world and evolving how people engage with one another.”

“The power of Reddit Gifts was never in the software, and has always belonged to the r/secretsanta community of gifters around the world, which has connected people and been an extension of our mission to bring community and belonging to everyone in the world. We’re hopeful that spirit will continue in the future.”

Reddit’s true Unique Selling Point might not lie in demographics, anonymity, or offerings. It is the community-building power that has built an ever-growing loyal user and fanbase over the years. In 2019 Reddit partnered YPulse to understand core tenets that drive a successful online community on Reddit. They found these 5 core tenets:

Reddit has already raised more than $250 million in Series E funding this year and is set to raise $700 Million in Series F funding from existing and new investors. Reddit is set to explore and grow aspects including video, advertising, consumer products, and expansion in the digital age. With the higher human, technological, and capital resources, Reddit is building its future and the future of media!

What’s interesting is to see the rising competition in community building space by other tech giants. Twitter is launching a new feature called Communities that will allow users with similar interests to connect with each other. This means that when someone tweets in a community, only members of that community can reply. These tweets, however, will still be publicly visible on a community page and non-members will be able to read, retweet, and report them. Let’s see how Reddit modifies its business model to outsmart the competition.

Anisha is a creative student trying to learn and fulfill her curiosity in the business world, one domain at a time. Trying story writing and poetry at one end and exploring business fields on the other, She is currently a student at Shaheed Sukhdev College of Business Studies.